Tsʼishaa: Archaeology and Ethnography of a Nuu-chah-nulth Origin Site in Barkley Sound

The Tseshaht Archaeological Project was initiated as a joint endeavour of the Tseshaht First Nation and Parks Canada. The Tseshaht, one of the 14 members of the Nuu-chah-nulth Tribal Council on western Vancouver Island, reside today on their reserves near the city of Port Alberni. Their traditional territories, however, include the Broken Group islands of Barkley Sound, now within Pacific Rim National Park Reserve. This volume reports the results of three seasons of fieldwork in Barkley Sound at Ts'ishaa, the ancient village that was the centre of the Tseshaht world for millennia and from which they derive their name. This was the location in which the Tseshaht people first came into being according to their creation story. This volume presents extensive ethnographic information on Tseshaht culture and traces the changes in social and political organization through amalgamations with neighbouring groups in the early historic period. It also provides detailed descriptions and analysis of the materials recovered through large-scale archaeological excavation at this important site, documenting an occupation that spanned the last 5000 years. Appendices present specific contributions to the research by Michael Wilson (Regional Geology, Geoarchaeology and Artifact Lithologies), Marty Magne (Lithic Analysis), Ian Sumpter (Analysis of Shellfish Assemblages), Gay Frederick and Susan Crockford (Analysis of Vertebrate Fauna) and Iain McKechnie (Small Fish Remains from the Column Samples). The results make a significant contribution to our knowledge of Nuu-chah-nulth prehistory and, more generally, Northwest Coast archaeology. 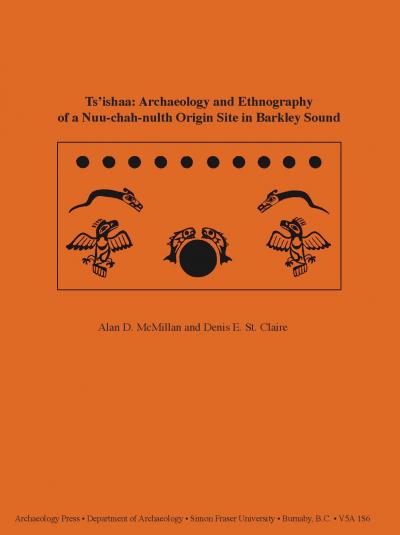