During the past three decades archaeological research in the Strait of Georgia region has concentrated upon the establishment and refinement of regional chronologies. The Fraser delta sequence, until quite recently at least, was considered to date to approximately 1000 B.C. at the earliest. The sequence consisted of five phases which are, ear1iest to latest: Locarno Beach, Marpole, Whalen II, PreStselax and Stselax. Pre-Stselax was presented as a provisional term denoting a developmental stage between Whalen II and Stselax (Borden 1970: 110). For a number of reasons the validity of the Whalen II phase has been questioned and it has been suggested that this phase be deleted (Mitchell 1971 a:56; Fladmark 1974).Since the presentation of the Fraser delta sequence two immediate problems, both temporal in nature, have become apparent. The first problem in the sequence related to the origins of the Locarno Beach phase (i.e. the pre-1000 B.C. time period). Archaeologists have long suspected that "early" culture-bearing deposits existed in the lower Fraser vicinity and the discovery of an early sequence in the Fraser Canyon (Borden 1957) heightened this suspicion. Lately, this problem has been addressed and a number of researchers (Carlson 1970; Calvert 1970; Mitchell 1971a; Loy 1972; Percy 1974) have made important contributions to the 5000–1000 B.C. period. Much of this material has been recently synthesized (Borden 1975). Matson (1976) has now added significant new data to the early end of this sequence. The second problem involved the poorly understood A.D. 400–1200 time period and it is this time period on which the present study focuses. In 1971 examination of a number of surface collections from the Belcarra Park site convinced the author that the site contained a late prehistoric component. Included in all collections were artifact types considered characteristic of late components defined for the region (Borden 1970:96; Carlson 1970: 120; Mitchell 1971 a:48). Noteworthy in the Belcarra Park collections was the presence of relatively large percentages of small triangular chipped stone projectile points of the side-notched and corner-notched variety and of small triangular ground slate projectile points of the side-notched variety. This presence suggested that the Belcarra Park site contained deposits belonging to the A.D. 400–1200 time period and that the potential for making a statement about the chronology and culture change for this time period seemed good. Hence the excavation strategy was directed toward recovery of a sample of closely associated artifacts to permit definition of valid cultural taxonomic units. This goal was accomplished and two superimposed assemblages were recovered: Belcarra Park I and Belcarra Park II. 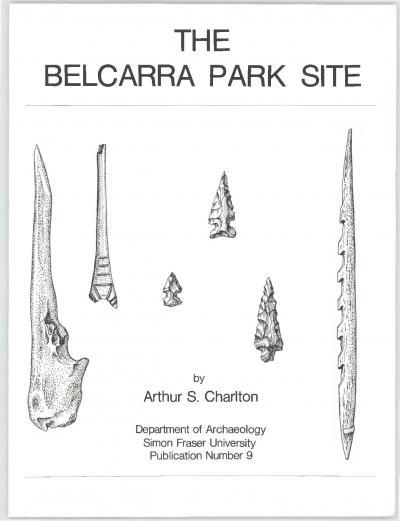