The Archaeology of Kamloops

This report is concerned with archaeological excavations in the south-central interior of British Columbia, in the vicinity of Kamloops. The principal results of the research are the description and incorporation of new archaeological data into a cultural-historical synthesis for the Kamloops locality. The purpose of the first section is to introduce the objectives of the research, the area investigated, previous archaeology, and the list of archaeological units utilized to interpret the new data. The ultimate research objective is the reconstruction of the culture history for the Kamloops locality. Since at the outset of the research, the prehistory was very little known, the immediate research objective was to sample a selection of sites to determine their cultural content and temporal range. As the funding for field research was directed towards salvage of threatened sites, the sites chosen were, for the most part, those in the greatest immediate danger of destruction. I n the reconstruction of the culture history for the locality, the archaeological features and materials are described in detail, and a sequence of archaeological units is devised. This sequence is then compared to cultural sequences for other localities in the Interior Plateau of British Columbia. The research area is termed the Kamloops locality, the definition of locality being an archaeological unit "...small enough to permit the working assumption of complete cultural homogeneity at any given time" (Willey and Phillips 1958:18). The Kamloops locality has as its focal point the confluence of the North and South Thompson Rivers. It extends along the river valleys eastwards to Monte Creek, northwards to Rayleigh, and westwards to the shores of Lake Kamloops. Figure 1 shows the location in southcentral British Columbia of the Kamloops and other archaeological localities mentioned in the text. The Thompson Plateau is a gently rolling upland of low relief ranging from 1200 to 1500 metres above sea level, with only occasional mountain peak elevations of above 1800 metres (Holland 1964:71). It is the most deeply dissected section of the Interior Plateau, as evidenced by the South Thompson River Valley. It is steeply incised, averaging 3.5 km in width, and whose floor ranges from 600 to 1200 metres below the plateau level (Fulton 1967:1; Tipper 1971 :11). 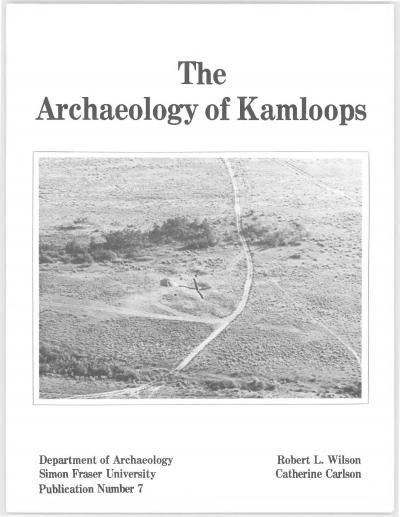