Settlement Patterns of the Draper and White Sites: 1973 Excavations

The 1973 excavations at the Draper and White sites were part of the Pickering airport salvage project which was oriented toward the recovery of settlement pattern inform ation. There is strong indication that a major determinant in the location of both sites was proximity to soils suitable for maize horticulture, to water sources and possibly to areas of high game density. Defense may also have been a major locational determinant at both sites. There is tenta tive evidence for a palisade at Draper.

It is postulated that the White site — only over a mile from Draper — may have been used during a part of its occupation as a summer encampment or village for groups from Draper tending maize fields and/or obtaining other economic resources in bulk such as fish or birds. In support of this the boundaries of the maize gardens cleared by the Draper and White occupants were mapped, and the White site falls within the radius of these Draper fields. Moreover, faunal and floral remains are very different at the two sites, White having much more fish, few mammals, a high ratio of worked bone and a very high ratio of human remains. Average radiocarbon dates are relatively close for the two sites. Concerning the intra-site settlement pattern ing, no structures were encountered at White (a product of small sampling). At Draper, house orientations and positions relative to middens appeared to conform to the standardized pattern of northwest orientation in Lake Ontario Iroquois. Because of this and the unique in situ nature of deposits

at Draper, we concentrated on intra-structure settlement pattern data of structure 2. The patterning here was characterized by an unexpectedly pronounced degree of activity specialization and coordination throughout the structure. This seems to imply a highly organized corporate residence group. Because o f the requirements o f such economic articulation and because there were definite concentrations of pits and other features plausibly associated with feasting activities, it seems reasonable to postulate a kind of longhouse big man or head man. Because authority seems to have been expressed in economic spheres, it also seems reasonable to argue that economics (namely trade goods) were ultimately the influence basis of head men and the integrating force behind the longhouse corporate structure. Trade itself, or warfare engendered by compe tition over trade, was probably responsible for increases in settlement sizes at this time. Draper is one of the earliest large Lake Ontario Iroquois settlements. On the basis of ceramic styles associated with household locations within structure 2, residence does not appear to have been strictly matrilocal, although there are definite stylistic groupings within the structure, indicating some tendency toward matrilocality.

Site abandonment does not appear to be due to game depletion in the area.

Two infant burials were discovered in the floor, and at both sites there were indications of human mutilation. 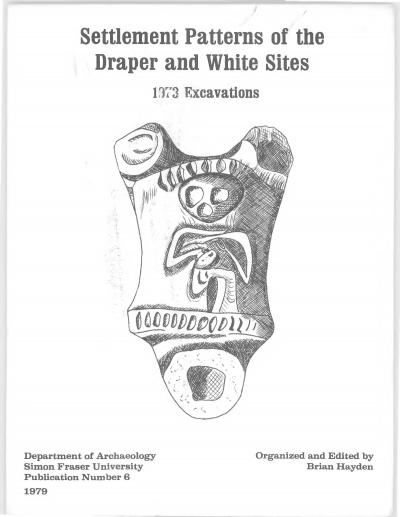