Early historic and ethnographic accounts report the presence of two types of dogs (Canis familiaris) kept by the Makah and Coast Salish peoples of the south central Northwest Coast of Sorth America (southeastern Vancouver Island, northern Olympic Peninsula, the Gulf Islands, Puget Sound and the Fraser River Delta). These accounts describe a medium-sized, short-haired dog and a smaller, long-haired one. The small type or "wool" dog was reportedly kept almost exclusively for its thick soft fur, which was woven into blankets. The ethnohistoric evidence suggests that the two types of dogs were deliberately maintained as separate populations, with explicit economic reasons for doing so, and thus may constitute true breeds. This pattern of dog use has not been recorded anywhere else in North America. However, the cultural implications of this unique situation cannot be appreciated fully until the issue of whether the wool dog really existed as a separate type during prehistoric times is resolved. The purpose of this study was to determine whether two distinct physical types could be distinguished within a sample of 1163 dog skeletal remains collected from 20 archaeological sites spanning 5000 years of prehistory. The sample consists of crania, mandibles, major front and hind limb elements, selected tarsals, metapodials and vertebrae. A statistical method cribbed from paleontological studies was used to interpret the variation in size demonstrated by the sample. This method allowed specimens to be classified, on an element by element basis, as either large or small according to its total length dimension. Multivariate discriminant function analysis was used to investigate the relationship between breadth and length dimensions. This analysis constitutes the first comprehensive work on prehistoric dog remains from this area. It is a long overdue database that will allow almost all dog skeletal elements, previously excavated material and future remains alike, to be compared and assessed. 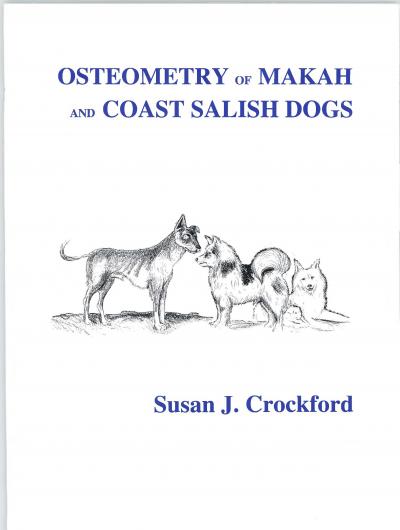