Mortuary Variability and Status Differentiation on the Columbia-Fraser Plateau

The goal of the present work is to explore variability in Plateau mortuary assemblages, with an emphasis on that portion of the variability which can be related to socioeconomic status differentiation. By necessity the research focuses on the differential distribution of grave inclusions. Particular attention is given to discovering differences in mortuary structure between different regions of the Plateau, and between the middle prehistoric (approximately 4000-2000 B.P.), the late prehistoric (approximately 2000-200 B.P.), and the protohistoric period. Historic period documentation suggests that certain areas of the Plateau were characterised by more complex social organisation than others. These can seemingly be related to especially productive fishing locales, which presumably allowed the creation of greater surpluses to fuel economic competition. The formal testing of this hypothesis linking mortuary variability, social complexity, and resource richness is not a component of this work, although it is with such eventual goals in mind that the research is undertaken. Since there is essentially no framework upon which to build, much of the work will be exploratory. In terms of Gibbon's (1984) classification of research strategies, this work can best be described as an exploratory investigation in which archaeological data are examined and patterns sought. Hypotheses are more likely to be generated than tested in an approach of this kind. 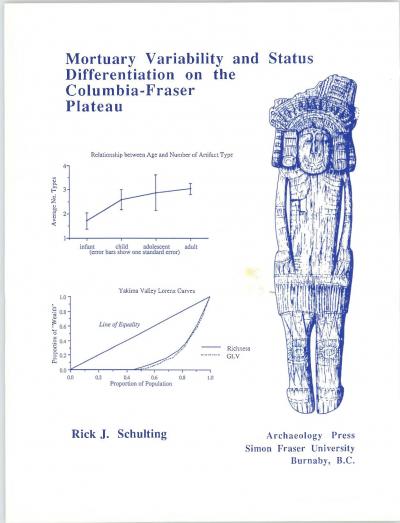