Integrated Lithic Analysis: The Significance and Function of Key-Shaped Formed Unifaces on the Interior Plateau of North

Interior Plateau archaeologists have long recognised the potential for "key-shaped formed unifaces" to be formally recognised as reliable temporal horizon markers and to provide important information concerning specific task activities performed at prehistoric sites. The main objectives of this study are (1) to determine the geographical distribution of key-shaped unifaces in Northwest; (2) to disclose their approximate relative duration of use in areas where they have been identified; and (3) to determine their primary function on the Interior Plateau. This tool type has been documented in two major cultural and geographic areas in the Northwest: the Interior Plateau and some of its immediately adjacent regions; and throughout most of the Arctic. Current radiocarbon age estimates suggest they were used between ca. 3000 and 1000 BP on the Canadian Plateau. On the Columbia Plateau they have been found in contexts dating between ca. 4000 and 1000 BP. The 1000 year disparity between the appearance dates in these two contiguous culture sub-areas may be the result of sampling error, as very few site dating between ca. 4000 and 3000 BP have been investigated on the Canadian Plateau. Very similar tools were used in the Arctic commencing sometime between ca. 4500 and 4000 BP, where they also disappeared about 1000 BP. A study sample of 129 specimens from excavations and surface collections on the Canadian Plateau were examined to generate descriptive data and to determine their use. Results of design theory, residue, microwear and experimental analyses all suggest that the primary function of key shaped formed unifaces on the Interior Plateau involved working stalks and branches of woody plants. A possible secondary function for these tools may have involved occasional shaving and smoothing of soaked or boiled antler beams and tines. 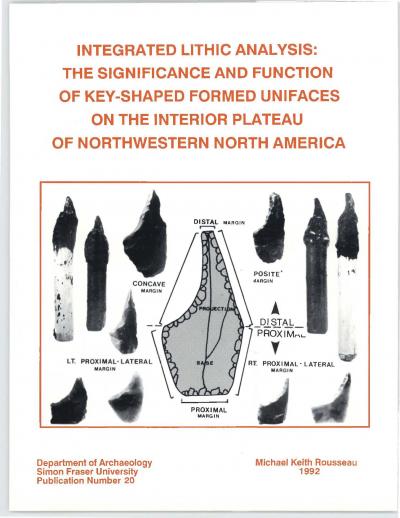