Glass and Ice: The Archaeology of Mt. Edziza

This report summarizes the methods and results of archaeological investigations conducted in the Mt. Edziza region of northwestern interior British Columbia in the summer of 1981. Mt. Edziza, situated within the Stikine River drainage near the small community of Telegraph Creek, has long been known as the source of at least 4 chemically distinct varieties of obsidian identified in archaeological sites throughout northern British Columbia and adjacent areas (Nelson et al. 1975). Archaeological work conducted in the Telegraph Creek area in 1969 and 1970 indicated the local presence of a microblade technology (the "Ice Mountain Microblade Industry") which, however, was not then reliably dated or culturally associated (Smith 1970, 1971, 1974a, b). Our 1981 research had several preliminary goals, including understanding the nature of aboriginal utilization of alpine-subalpine zones in general, and the Edziza obsidian sources in particular; as well as clarification of the age and relationships of the Ice Mountain Microblade Industry (Ice Mountain is one of the variant translations of the word "Edziza"). In addition we hoped to begin development of a regional cultural historical and paleoenvironmental sequence for a part of British Columbia which was still essentially archaeologically unknown. I believe that we were successful, to varying degrees, in all these areas and that data now available from the Edziza region may begin to shed some initial light on the nature, age, and relationships of local prehistoric cultures spanning the last ca. 5000+ years. 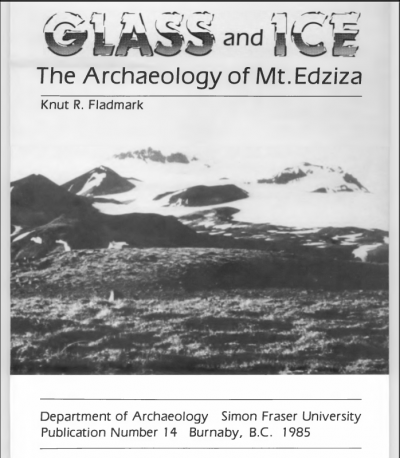